East Hedleyhope is a small rural community of mostly terraced housing 8 miles west of Durham City.
Hedleyhope Community Association works with Hedleyhope Parish Council to improve the lives of people in the area.

The Community Association manages a small playground and runs social activities and events.

The Association also runs a History Group and manages a 13ha nature reserve on land leased from Durham Council.

Tony has a very unusual ladder. Lightweight and collapsible it folds down to the size of a handkerchief and can be carried over stiles, up embankments, across rivers and through fields of nettles. A few weeks ago Tony fell off his ladder. Fortunately unscathed, Tony got up and carried on with the voluntary work that takes up much of his time - ringing birds for Northumbria Bird Ringing Group.
Bird ringing, which has been carried out in the UK for over a century, is the technique used to study wild birds. A small individually numbered metal tag is attached to the leg of a bird, so that aspects of the bird's life such as migration and population change can be studied. When a bird is caught, a ring of suitable size with a unique number is attached to the bird's leg. The bird is often weighed and measured, examined for data relevant to the ringer's project, and then released.
﻿ 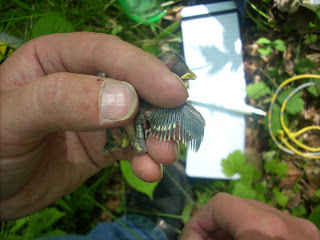 ﻿
The rings are very light, and are designed to have no adverse effect on the birds - indeed, the whole basis of using ringing to gain data is that ringed birds should behave in the same way as the unringed population. The birds so tagged can then be identified when they are re-trapped, or found dead, later.
The method most frequently used to catch fully-grown birds is the mist net, erected between poles, and is designed to catch birds in flight. Birds can only be removed safely from mist nets by experienced ringers who have received special training. About twenty percent are ringed as chicks in the nest and this is valuable because the precise age and origin of the birds are then known.
When a ringed bird is found, and the ring number read and reported back this is termed a ringing recovery or control. Unfortunately only a tiny number of rings are recovered so if you ever find a ring on a dead bird please report it at Euring
Tony has been carrying out ringing for the Community Association for two years. The Association agreed to chicks on the nest being ringed but the decision to allow mist netting was controversial. It went to the vote at an Environment Group meeting and over half of the Group were against the proposal as members were concerned about the tiny, tiny chance of an accidental fatality.
Tony installed 31 bird boxes with a wide range of openings to attract some of the different types of birds that may be breeding in the Woodland. The boxes were built by a volunteer using recycled wood.
The Community Association is currently receiving funding from the Forestry Commission's Declining Woodland Bird grant so it is hoped that the ringing should provide important information about how management operations are helping woodland species. For information on the Woodland Bird Declining Species Grant see Forestry Commission
From the end of March the boxes were checked weekly or fortnightly until bird ringing at the end of May. Unfortunately the occupied boxes were exclusively used by just two species Blue Tit and Great Tit. Ringing was carried out on the young birds when they reached the correct age. The results from the 2010 ringing is as follows.
Clutch size varied from 7 to 12 eggs which is quite large following an extremely snowy cold winter. There were 94 Blue Tit pulli (or chicks) and 21 Great Tit pulli. A total of 115 pulli were ringed which is a good result for the first year from 15 boxes.
The results from 2011 will be posted soon - when the more nerdy amongst us will be able to get a fix on raw data, tables and possibly graphs.
One a site starts to be ringed it will continue to do so for as long as ringers are available to do so - and who knows perhaps one year we might even ring something exciting like a Pied Flycatcher or a Redstart!
In the UK ringing is supervised by the British Trust for Ornithology where over 2,600 trained, volunteer ringers ring over 900,000 birds in Britain and Ireland each year. For information on becoming a ringer see BTO 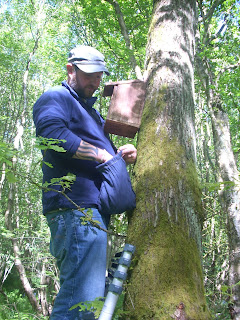 This is not a commitment to be taken on lightly as it involves giving up thousands of hours in training, getting up in the middle of the night, working outside in all weathers and taking your life in your hands up ladders on uneven surfaces.
Posted by Clare at 05:57

Check at the end of Oct for Nov events.